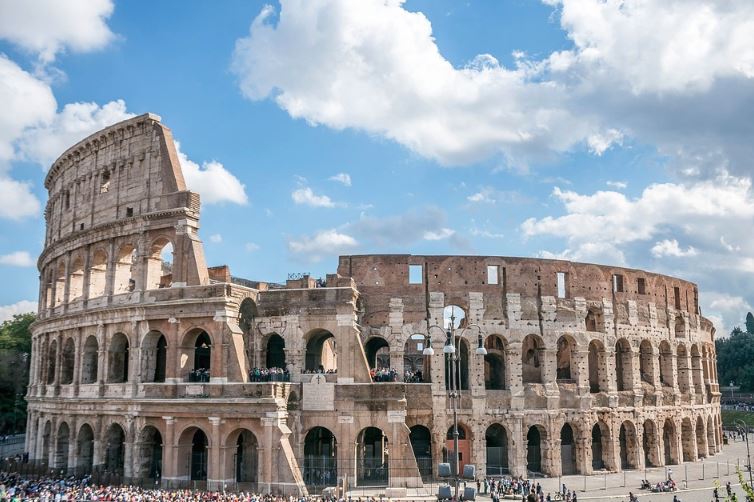 Benefits taking private tours of Rome: You choose who you hang out with. Meeting new people on a tour can sometimes be half the fun of your vacation – but there is always a risk that there is someone on the tour that you don’t get along with which can sometimes put a damper on the trip. By booking a private tour, you have the opportunity to gather the people you want to hang out with and feel that would enjoy the same kind of vacation as you.

What can you see in Rome : Ostia Antica is an important archeological site that once was the seaport for Rome. It is located less than 20 miles from Rome at the mouth of the River Tiber. The site has well-preserved ancient buildings, some of which date back to the fourth century BC. Ostia Antica is known for the outstanding frescoes and mosaics on these old buildings, as well as ancient public toilets that turned bathrooms into a social setting.

The Catacombs of San Callisto (St. Calixtus) and San Sebastiano, both underground burial places in the Via Appia Antica, are extensive – San Callista fills an area of 300 by 400 meters — with intricate multi-layered networks of passages and chambers carved into the soft tufa. In addition to the tombs, St. Calixtus has six sacramental chapels, constructed between 290 and 310, with both pagan and early Christian wall paintings. In the Papal Crypt are the tombs of most of the martyred Popes of the third century identified by Greek inscriptions. San Sebastiano, one of Rome’s seven pilgrimage churches, was built in the fourth century on the site of old cemeteries and catacombs that, along with the foundations of a Constantinian basilica, can be explored. Tomb chambers are on several levels with fine paintings, stucco decoration, and inscriptions dating to the first century AD. Although venerated remains are thought to have been brought here for safekeeping during persecutions, these were cemeteries, not hiding places for Christians.

Basilica of San Clemente – Located just a few blocks from the Coliseum, the 12th century Basilica of San Clemente is built on top of a 4th century Church and older Roman temple. The present church is noted for its fabulous frescoes and mosaics. For an admission fee, it is possible to explore the excavations of the lower two levels, which is a fascinating journey into the history of Rome. Extra info on private Rome tours…

The Spanish Steps, The Spanish Steps connect Piazza di Spagna with Piazza Trinit? dei Monti, and are another excellent example of Baroque Roman architecture. They consist of 138 steps and were financed by a French diplomat who wanted to link the French Trinit? dei Monti church with the Spanish piazza below (so named for the Spanish Embassy to the Holy See). This area is a buzzing commercial center and attracted artists throughout the centuries – Giorgio de Chirico and John Keats had studios overlooking the piazza.

Free things to do in Rome : Wander the Villa Borghese Gardens, Villa Borghese is the largest public park in Rome and access to gardens is free of charge. There are several ways to access the gardens, but visitors particularly like the approach from the Spanish Steps. If you want to rent a bike to tour the grounds, they are available for a fee in several locations in the park. You’ll also find places to grab a bite, from restaurants to ice cream vendors. The gardens are open from dawn to dusk. The Villa Borghese Gallery is worth a visit but there is a charge. Since they limit the number of people who visit the art gallery per hour, it is necessary to buy a ticket online. Stroll around the gardens either before or after your visit to the Villa Borghese Gallery.